Uncategorized
October 17, 2018 by The Collective
0

Brace yourselves; we’re going for a trip through “frozen wilderness”.

A visit to the Arctic literally puts you on top of the world. If chasing the dancing northern lights, glacier gazing, attending Arctic music festivals or reindeer sledging is on your bucket list then read on. Geographically the northernmost part of the planet was known to be inhospitable, unpredictable and mysterious. Until the 20th century, only the native tribesmen could survive here but now the modern traveler can combine luxury and comfort with a memorable trip to the remotest and coldest places on Earth.

Whether you head to the tundra landscapes of Alaska, Canada and Russia or take a cruise around the icecaps of Spitsbergen and Greenland, sceneries are surreal and beautifully bleak. A trip to Santa’s home comes at a premium and will require proper planning. A stay at a five star property for 4-5 days could cost more than a cruise. Think of chartered planes, long treks over land and water, and total self-sufficiency. May to August is the recommended window for a visit, when temperatures and daylight hours are favorable.

CANADA: The most travel friendly destination to experience the Arctic landscapes. Some five star properties, like The Arctic Watch Wilderness Lodge, on Somerset Island or the Arctic Haven Lodge on Ennadai Lake, let you experience the most extraordinary views. The Yukon, Northwest Territories and Nunavut (which boasts Inuit music festivals) stretch beyond the Arctic Circle, with some islands coming within 1300 kilometres of the North Pole.

The Aurora Borealis, or the dancing northern lights, is among the biggest attractions of the Arctic. Legend has it that the lights are ancestral spirits playing soccer with the head of a walrus. 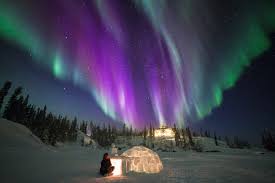 YUKON: The Yukon (Klondike, Kluane, southern lakes and white horse regions) allows you to pause, disconnect and reset. Many visit for a healthy, laid-back experience. Wilderness workshops focus on photography, painting and writing while others combine outdoor recreation with wellness practice including sinking into the therapeutic waters of a hot spring.

ARCTIC ALASKA: The windswept towns here offer plenty of activities — kayaking, wandering through unexplored national parks or driving the vast Dalton Highway. Most Alaska tours into the Arctic region include a ceremonial crossing of the Arctic Circle, and some even offer the chance to dip your toe into the Arctic Ocean. The Arctic national wildlife refuge, also known as the “Serengeti of the north” is home to surprisingly diverse wildlife. TROMSO, NORWAY: The Arctic gets arty here with a lively cultural scene and nightlife. Tromso prides itself on having more pubs than all of Norwegian towns combined. A journey in search of the northern lights, reindeer sledging with authentic Sami guides, star gazing or taking a cruise on a luxurious catamaran are all on offer here.

MURMANSK, RUSSIA: Murmansk, in the northwest of Russia, at the end of the deep bay off the Barents Sea, was founded around World War 1. Aloysha, a 30-metre monument to the Soviet army and airmen who participated in World War 2, is a beautiful spot for a visit. Murmansk is populated with museums the most noteworthy of which is the Nuclear Icebreaker Ship and museum. This was the world’s first nuclear-powered surface ship and now rests in the docks of Murmansk.

NUUK, GREENLAND: The heart of modern Greenland is bustling with gourmet restaurants, fashion boutiques and is a Northern Lights inspired cultural centre. It’s one of the most style savvy arctic metropolises. Another beautiful place in Greenland is the Ilulissat Icefjord, a UNESCO World Heritage Site, is the most popular tourist destination in Greenland. Sledge dogs are a natural part of the transportation and the harbour is busy with boats rushing to and from fishing close to the great icebergs. A boat trip into the world-famous ice fjord, a helicopter trip along the glacier front and whale safaris are must-dos.